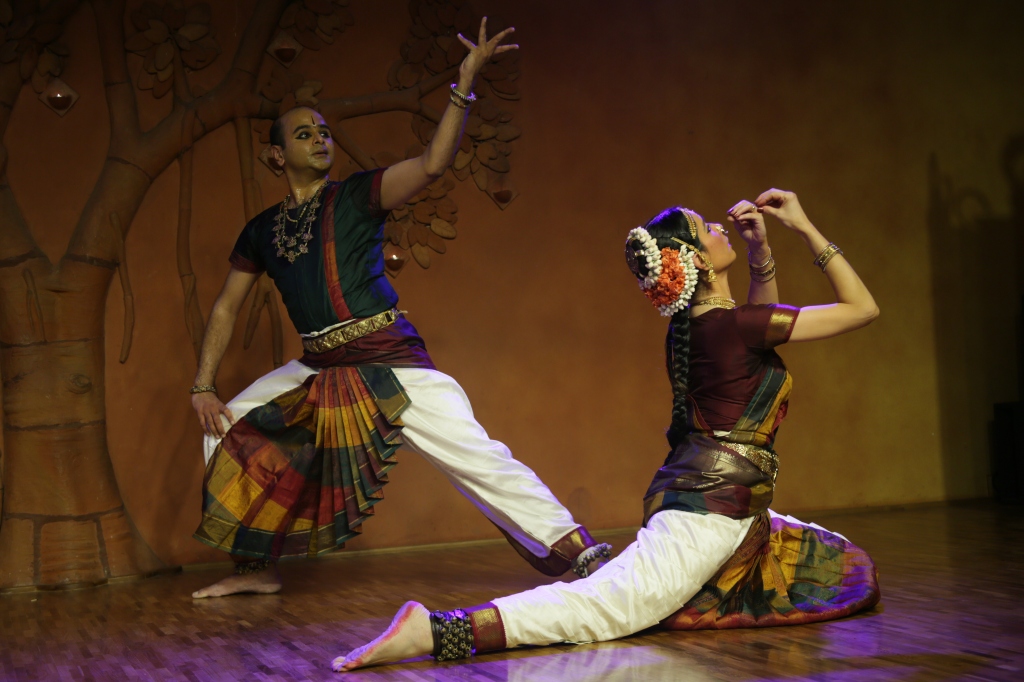 Ardhanareeswara celebrates the half-man, half-woman form of the Hindu god Shiva. The ancient classical Sanskrit text by Adi Shankaracharya speaks of the many attributes of the great form of Ardhanareeswara—the golden radiance of the body on one side, the luminescence of a camphor lamp on the other; adorned in beautiful silks on one side, cloaked in the eight directions on the other. The dichotomies are so many in this radiating form. This choreography further explores the binaries that live within each human being—physical and mental. But moreover, it seeks to answer emotional and spiritual questions. The presentation seeks different perspectives within the heightened spiritual energy that emanates from meditating on the great God Ardhanareeswara, closing the eyes, soaking in ragas, and punctuating time with moving rhythmic patterns.

Vijay Palaparty | Founder & Co-Artistic Director | Spilling Ink
Vijay Palaparty is a Bharatanatyam and Kuchipudi dancer and choreographer. He has trained in India with Uma Rama Rao at Lasya Priya (Hyderabad) and with Sudharani Raghupathy at Shree Bharatalaya (Chennai). He has also trained with Padma Rajagopal at Nupur Anjali School of Dance (Cleveland). Through Spilling Ink, he produces and presents literary, visual and performing arts projects. Vijay was awarded an artist fellowship from the District of Columbia Commission on the Arts and Humanities in Washington, DC for artistic excellence. He was also recognized through DCCAH’s Young Artist program, which commends young segments of Washington, DC who create art and contribute to the vitality of the city. A graduate of Carnegie Mellon University with a bachelor’s degree in professional writing and two master’s degrees—in professional writing and in literary and cultural studies, Vijay is a senior communications specialist at the Federal Reserve Board of Governors (Washington, DC). He also completed his M.B.A. at the University of Maryland (College Park, MD).

Nalini Prakash | Co-Artistic Director | Spilling Ink
Nalini Prakash is an acclaimed dancer, choreographer and teacher who has performed throughout India and the United States. Her training primarily took place at Shree Bharatalaya (Chennai), where she studied and performed with its founder and principal dancer, Sudharani Raghupathy. She was awarded a Government of India scholarship in recognition of her talent as a dancer. Nalini was instrumental in establishing and spreading arts education in the Nilgiris region through her school of Bharatanatyam, Silambam, in Coonoor, and also by founding the Bharatiya Vidya Bhavan, Nilgiris Kendra, part of a larger national institute committed to Indian culture, heritage and education. To recognize her efforts in bringing the arts to an underserved area, the Rotary Club of Nilgiris presented Nalini with an Award for Vocational Excellence. Nalini holds a master’s degree in dance/movement therapy from Drexel University (Philadelphia), and a master’s degree in performing arts from Baroda University. She is also a certified movement analyst, and currently works to integrate elements of Indian dance and creative movement in her work as a dance/movement therapist at Saint Elizabeths Hospital (Washington, DC), to enhance the quality of life for individuals with serious and persistent mental illness.