Rasa Festival 2020 is proud to showcase a diverse lineup of musical and multidisciplinary performances by artists based in the US, India, and Pakistan.

Monit Pal and Rohen Bose – Kolkata, India – will present music on the sarod and tabla/percussion.

Manasi Joshi-Singh – Austin, TX – will present Hindustani vocal music with her original artwork as a backdrop.

Poly Varghese – Chennai, India – performs Hindustani music on Mohan veena juxtaposed by a reading of his poetry by Deepa Ramachandan – Melbourne, Australia – which has been translated from Malayalam to English. 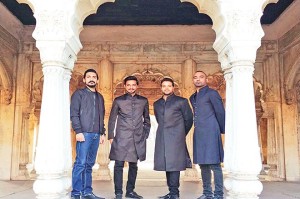 Absurdity and the oblivion of power struggle retrospectively through the lens of The Great Mughal King – Akbar.

The name of this Mughal king reminds us of secular Society. He was the first Muslim king born on the Indus soil. His father forced him not to marry Anarkali, whose identity still remains a myth.

On one hand, Akbar was considered a liberal king, but on the other, he is considered to be a conservative king as well. In this video, we have tried to capture his essence and the connection between us.

Lahore as a city represents an authentic character in the video because this city has the architectural traces of the Mughals. There are some patterns and drawings which revolve timelessly pointing towards the decorative curl of wars in his time.

An army of fish symbolizes peace and fertility. The globe symbolizes power, which everyone in the story craves for themselves. However, in the end, Akbar hands it over to his son, Salim. The whole story is an imaginative journey that places us in Akbar’s story.

To find the joy and tension of both the contemporary and Mughal eras, the other characters were taken from different miniature Mughal paintings. These distort their identities and merge them with the present time through moving images to create a new canvas – in order to submerge reality and to turn it into a fictionally irrational story.

For us, the four characters of the band “Mughal E Funk” in the video are the artists who have time traveled and witnessed the greatness of the Mughals through teleportation by their instruments.

Dr. Amie Maciszewski of Dallas, TX will play the sitar with tabla accompaniment by Paarth Kuntawala.

Amie is an internationally acclaimed sitarist, teaching artist, and ethnomusicologist who has spent her adult life studying, performing, teaching, and promoting the music of South Asia.

Her decade of training includes:

Amie has performed in concerts and taught in residencies, workshops, and on several university faculties throughout North America, India, Pakistan, Europe, and Japan.

She co-directed and directed the University of Alberta Indian Music Ensemble. Amie has been a juried artist on the Texas Arts Commission Touring Roster, and Mid-America Arts Alliance. She’s an impaneled Artist of the India World Cultural Forum and multiple grant recipient from the City of Dallas Office of Arts and Culture and City of Austin Cultural Arts Division.

From 2013-14 Amie toured with Oscar-winning screenwriter Jean-Claude Carriere as a soundtrack composer and performer for Enacte Arts’ production of Carriere’s Mahabharata.

She was awarded the Gandharva Puraskar in 2014 by the Hindustan Art & Music Society – Burdwan, India – for her contributions to Indian music abroad.

In 2016, upon invitation from the US Consulate – Lahore, Pakistan, she completed a cultural diplomacy performance and outreach tour, during which the Lahore/Mozang Rotary Club felicitated her for “using music as a tool for peace across borders.”

In 2018, with a team supported by a grant from the American Institute of Pakistan Studies, she conducted faculty training workshops for Pakistan’s Higher Education Commission in Punjab and Khyber Pakhtunkwa, and sitar performance/music instruction at the National Academy for Performing Arts (NAPA) in Karachi.

An active touring performer, she founded and directs the Sangeet Millennium Ensemble, an acclaimed collective of local, national, and international musicians who blend South Asian classical, folk, and devotional music with jazz and other world musics. The ensemble has three CDs to their credit.

A graduate of Darpana Academy of Performing Arts in Ahmedabad, Somdatta is a Bharatnatyam dancer who trained since the age of four.

Darpana Academy was founded by Smt Mrinalini Sarabhai and is now being spearheaded by Maliika Sarabhai.

Somdatta performed for the Doordarshan and several other projects and choreographies in Ahmedabad. She has also judged various competitions in Ahmedabad and received awards.

Somdatta believes in continual learning which enlightens the path of our future generations. She learned Ballet and Modern Dance under the guidance of Jody Gazenbeek-Person, Jill Molinero, Jennifer Gladney, Rebecca Bradowski, and Lester Holmes at the MCCC – New Jersey.

​Along with a Masters in Business Administration in Marketing from Ahmedabad, India, she has continued her musical productions and has had three curated performances at Princeton University.

She has performed extensively around Europe and in cities like London, Budapest, and Berlin. She also has three released Rabindra Sangeet albums and one Bengali single on her belt.

Somdatta’s work continues in the field of performing arts through expanded collaborations and choreographies brought together for social causes.