—— In the words of Mia Risberg – Exhibit Curator

The word Mandali conjures a circle, a network, or a connection.

The latter is something that has often been on my mind the past few months. How do we engage meaningfully with others in a time when we often cannot physically be together?

Covid-19 and the ensuing lockdown have created an environment of artificial isolation, but also new opportunities for artists to interact online with the world at large.

This year, because of the virtual nature of the exhibit, I was thrilled to be able to invite not only artists that I admire locally, but also those who are geographically distant.

Mandali showcases the work and practice of 10 contemporary artists with a connection to India from various locations in the United States and India.

Although their backgrounds and processes are different, there is a visual thread in their work that carries through in the exhibit.

This thread serves as a reminder of how truly connected we are to one another, regardless of geography — a connection that is virtual but encompassing, much like a circle.

Mia Risberg is a painter based in Ann Arbor, Michigan, working in acrylic and oils. Born in Sweden, she spent her childhood often moving and living in various countries before settling in the United States as a young adult. She attended Pratt Institute and Hunter College where she graduated Magna Cum Laude with a BA in Fine Arts. She worked for many years as a graphic designer, and book designer, in the publishing industry, before returning to a full time art practice. She has exhibited at various venues in the U.S and, earlier this year, completed an arts residency at the Virginia Center for the Creative Arts.

Acharya received her Master of Fine Arts Degree from the Hoffberger School of Painting, Maryland Institute, College of Art, Baltimore, USA in 1998, and completed her Post Baccalaureate in 1996 from the same college. She was awarded the Aditya Vikram Birla Kala Kiran Puraskar in 2006, featured on the cover of India Today in 2005 and was recipient of the FICCI Young Woman Achievers award in 2013.

Acharya began exhibiting her works professionally in 1998 in the USA where she spent 10 years. She has held solo exhibitions with Chemould Prescott Road in Mumbai, Nature Morte in New Delhi and Kravets/Wehby in New York. Her major projects include a 32-foot mural for JSW in Mumbai, a 16-foot work for the Mumbai Airport and a “painting as performance” project in New Delhi. Her selected participations include shows at the San Jose Museum of Art in San Jose, Chatrapati Shivaji Museum in Mumbai, Griffith University in Brisbane, Spazio Oberdan in Milan, Webster University in St Louis, BosePacia Modern in New York, National Gallery of Modern Art in Mumbai and the Queens Museum of Art in New York.

The artist lives and works in Mumbai.

Charuka Arora (b.1993), post-graduated in Fashion Design from Domus Academy, Milan & Pearl Academy, Delhi. Her works have been exhibited in several group exhibitions in India and she has worked for several prestigious clients in India and abroad.
Her work investigates the emotional and psychological aspects of an urban woman’s life & her quest for identity. In context to the ever-changing environmental, cultural, and political times of the 21st century, she creates pieces that frequently begin with a response from her personal experiences in life but are eventually evolved further into something much more than her.
Charuka is quite intrigued by the tactile nature of paper and its endless possibilities. And, quite recently she has been adorning her works with embellishments and ornaments. Majority of her works involve watercolors, gouache, collages, 3D paper sculpting, printmaking, and drawings, along with oil paintings. She is a practicing artist and has been a design professional for over five years.

Chandrima Bhattacharrya completed her M.FA and B.FA studies from Kala Bhavana, Santiniketan in Pottery and Art History in 1987 and 89 respectively.

She worked as museum curator and art College and school teacher sporadically, but worked as a freelance artist constantly since 1989 till date.

She has shown extensively in India and abroad in more than 60 plus solo and group shows and has participated in several artists’ workshops organized by the Ministry of Culture and private galleries.

She’s received Junior and Senior Fellowship in Painting from Ministry of Culture, Govt. of India.

Caitlin Cartwright is a social change artist whose vibrant narrative works combine painting, drawing, and collage to explore the stories that connect people across cultures.  Many years spent living and working with vulnerable populations in locales such as Madagascar, Namibia, India, and elsewhere influence both the emotional and geographical scope of her pieces.  Caitlin earned her BFA from Maryland Institute College of Art, as well as a masters degree in sustainable international development from SIT, and completed a six-moth residency at the Pocosin Arts School of Fine Craft in Columbia, NC.  In combination with a long career in global development, she uses art as a storytelling tool for economic empowerment, peace building, and healing and wellness.  She has been profiled in Think TV’s Emmy winning The Art Show and her work will be featured in upcoming editions of New American Painters and Create Magazine.  Caitlin is currently based in Ohio, and her works and collaborative projects continue to be shown both nationally and abroad. 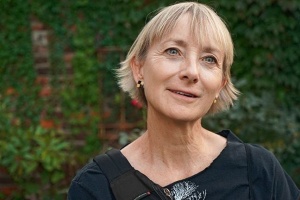 Amelia Currier is a life-long painter, printmaker and  assemblage artist . She received her BFA in Intaglio Printmaking at Wayne State University, attended the Instituto Allende, Mexico and The Boston Museum School of Fine Arts.

“I see constant evidence of our attempts to pull our distant primordial roots into present day existence. We instinctively seek solace in the rich, sensory realm of nature. The imagery I create is a visual bridge to this desire for connection and balance.”

Her work has been in numerous national and international juried shows and is in private and corporate collections.

I have obtained my B.F.A(2007) and M.F.A (2009) from Rabindra Bharati University, India specializing in sculpture. In 2011 I moved to the United States and since then I am showing my work in various prestigious shows around the USA and in India. I had two solo shows in Ann Arbor, Michigan(2018) and Toledo, Ohio( 2019). In recent years I have participated in “Investigation Pending” an ArtPrize 9 Exhibition, Cerasus Studio, Grand Rapids, Art Prize 8. Grand Rapids. Poway Centre for Performing Arts Show “Celebrating Summer Time”, California. “All Art Works”- ArtPrize hub,GrandRapids. My paintings were exhibited at Grove Gallery, University of California San Diego, Detroit Artist Markets “The Heat is On”, “Being rooted” a two person show,Hatch arts, Hamtramck, Michigan, Artsy online exclusive solo show “Womanhood has no vaccine”,2020. My works are in privet collection in the USA,UK and in India.

Soumya Netrabile was born in Bangalore, India and emigrated to the U.S. with her parents when she was 7 years old. She initially studied at Rutgers University, College of Engineering and then later at the School of the Art Institute of Chicago. She is currently a full-time painter and ceramic artist residing near Chicago. Through experimentation with different painting methodologies, she explores relationships between the human body, terrain, and the natural world. She’s exhibited her work nationally, most recently in group shows at La Loma Projects in California and at Karma Gallery in NY.

Nirmal Raja is an interdisciplinary artist living in Milwaukee, Wisconsin. She had lived in India, South Korea and Hong Kong before immigrating to the United States thirty years ago. She holds a BA in English Literature from St. Francis College in Hyderabad, India; a BFA from the Milwaukee Institute of Art and Design and an MFA from the University of Wisconsin Milwaukee. She has participated in solo and group shows in the Midwest, nationally and internationally. She is the recipient of several awards including “Graduate of The Decade” from University of Wisconsin, Milwaukee. She collaborates with other artists and strongly believes in investing energy into her immediate community while also considering the global. She curates exhibitions that bring people from different cultures and backgrounds together. She was a mentor at RedLine Milwaukee, a community arts incubator for six years and is now a mentor for the Milwaukee Artists Resource Network. 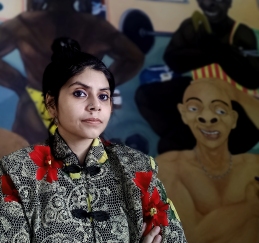 Pallavi Singh (b.1988). Currently living and working in New Delhi, India. Completed her master’s in fine art in Painting from College of Art, Delhi in 2011. Singh’s work predominantly in the medium of painting, her style of working is research-based, where society plays the role of a social laboratory and skills like observation, conversation, travelling and personal experiences are tools, to collect information to start her work. She is interested in art as a way of thinking and understanding the world around her not only as a practitioner but also from the lenses of a viewer.

Sajeev Visweswaran is a visual artist/printmaker based in Ann Arbor, USA. While he works in many media and styles, drawing always comes at the center of his work. Sajeev’s works draw on the tension between the mundane activities of everyday life and his political sensibilities, between his young life in village India and the world of fine art.

Sajeev received his training from the College of Art, New Delhi where he received his BFA, before completing his MVA at M.S. University, Baroda. His first solo show was held at 1, Shanthi Road, Bangalore in 2014, and his works have been selected for several exhibitions and group shows across India, as well as in Korea, Romania and France. Recently he curated a four-person exhibition, ‘Division, Commonality, Encounter’ at Scarab Club which was well received in the Detroit art community.