Rasa Festival is excited to present a unique exhibition with an astounding background story of the artist!


Sonabai: Another Way of Seeing is a multimedia exhibition that portrays photographs and videos of a vibrant rural Indian harvest dance with powerful clay sculptures by a variety of rural artists  inspired by this dance.  The movement, rhythms, colors and spirit of the dance are effectively evoked using long, free-floating chiffon scrims printed with life-size photographs of dancers and surrounded by enormous photomurals of swirling dance details. Separately displayed are sixteen powerful works of art created by six different sculptors from an extremely remote region of central India. 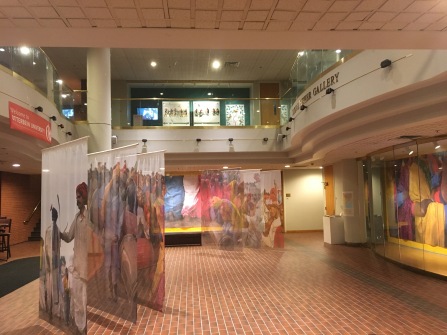 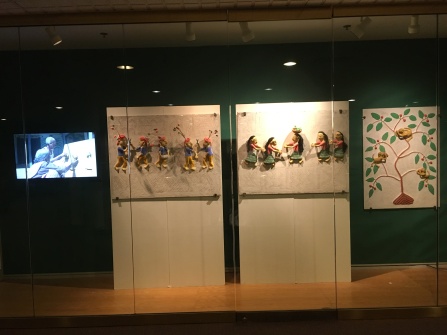 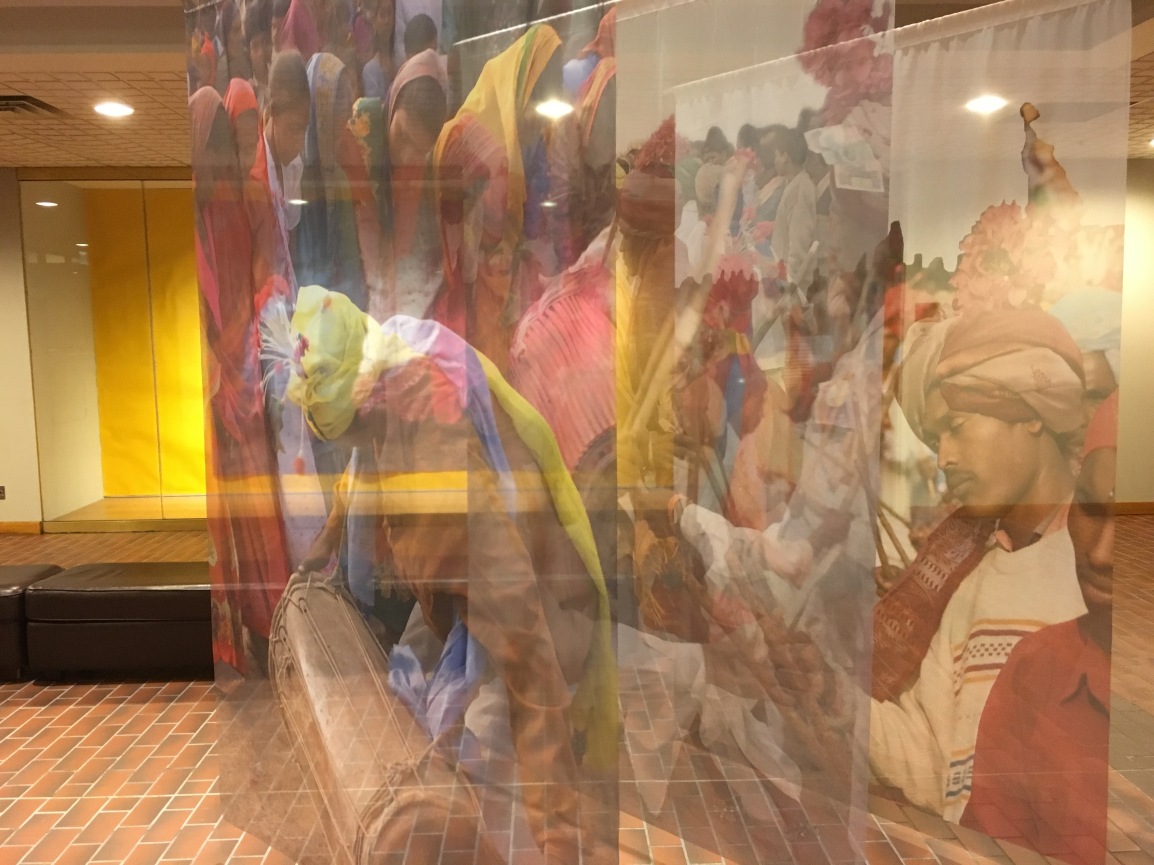 This exhibition celebrates one woman’s ability to transform her life and that of her family and community through her own internal spirit, strength and vision.

Sonabai Rajawar’s art was unique. The story of her early life is shocking: Sonabai’s elderly husband forced her to live in almost total isolation for fifteen years, seeing and being seen by no one. Drawing from her memories of the colorful world outside her windowless home, Sonabai invented sculpting techniques and forms of expression that had no precedent in India. She covered her interior walls with animated bas-reliefs, joining columns with delightfully sculpted latticework, and completely transforming her home into a wonderland of light, hue, whimsy and beauty.

Years later, India’s art world discovered Sonabai and gave her its most prestigious national awards. She passed away in her remote central Indian home in 2007. Her legacy remains, not only in her own works, but in those of her son, daughter-in-law and a whole group of artists throughout her region who now sculpt in a style single-handedly created by this remarkable woman. 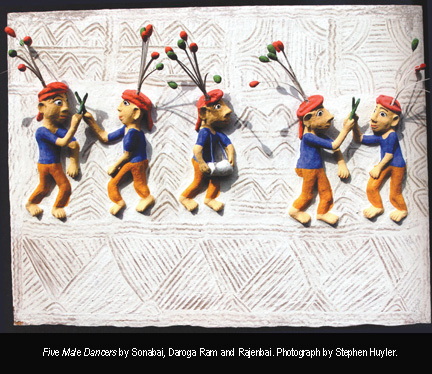 This exhibition was created by Dr. Stephen P. Huyler for Mingei International Museum of Folk Art in Balboa Park, San Diego, and was on display for thirteen months beginning in July, 2009. It was acknowledged at the time as the most popular exhibition ever shown in any of San Diego’s fourteen adjacent museums.

In August, 2016, a smaller version of the Mingei show was brought to the Fisher Gallery at Otterbein University, Columbus, Ohio. That installation can be viewed on YouTube:

Dr. Stephen Huyler: Exhibition Designer, Curator, Photographer and Filmmaker
Dr. Stephen P. Huyler is a cultural anthropologist and art historian who has spent the past forty-five years conducting a cross-cultural survey of the arts and crafts of India. Throughout the decades his primary focus has been championing women’s art and identity.

Huyler first met and was deeply impressed by Sonabai in 1986 soon after she was discovered by the Indian art world. Her remarkable story and creativity haunted him. Over a period of eight years beginning in 2001, Stephen visited Sonabai’s home in her remote central Indian village many times, recording her art in photographs and video. In 2004 he brought a film crew to document her work. At that time he commissioned Sonabai and her son Daroga Ram to sculpt whatever they chose. When they created the two dance sculptures (displayed in the left side of the upper gallery), Huyler was inspired to film the entire local harvest dance that this work depicted. His photographs were so successful that he wanted to share with others the visceral dance experience. He worked closely with Duggal Visual Solutions in Manhattan to create the dance room that creates context for the sculptures in the exhibition. Huyler’s documentary film about Sonabai has won Best Short Documentary awards in five prominent film international film festivals. That film is included in the back of his book about Sonabai that has received global attention. Both share the same title as this exhibition.

Dance Sculptures
Four artists working together created the two dance panels and the monkey panel in this case: Sonabai, her son Daroga Ram, her daughter-in-law Rajenbai, and their apprentice Buddhi Ram.
The production process is documented in this video. A core of sticks and straw was wrapped with rope for each figure and nailed to a piece of plywood. Clay was smoothed onto these cores and deftly sculpted into the shapes of the dancers. Turbans for the men were made of long coils of clay and adorned with stick pompoms to approximate those that the male dancers wear. The women’s hair was created by unwinding hemp rope and attaching it to the scalps before blackening it with pigment. White lime was finger-painted onto the backgrounds while poster paints brought bright colors to each figure. Finally little gold earrings were attached to each woman’s lobe. The dances that inspired these sculptures are shown in large photo murals and printed chiffon scrims in the exhibition.

Legacy
When Sonabai first received national and international acclaim as an artist, she was given a stipend by the government to teach the techniques of her creative production to other artists in her region. Although she was naturally shy from her years of enforced isolation, Sonabai had a profound influence upon many artists in her village and its surrounding communities. Even though she had invented her own style, it rapidly became named for the district itself: “The Surguji Style” and many of these young artists were requested to travel to art fairs in other parts of India to demonstrate their creativity. As a direct result, the economy of Sonabai’s entire region has improved.

The work of six local artists is particularly noteworthy. Sonabai’s son, Daroga Ram, and his wife, Rajenbai are the natural inheritors of this unusual skill. There are depictions of the harvest dance by three other artists. Atma Das and Bhagat Ram were taught by Sonabai in the government workshops and since have greatly expanded their artistic repertoires. Parbatibai, like Sonabai, was kept at the fringes of the community and taught herself how to sculpt. Her unique style has a raw power of its own.