Kritika Rajan is one of the well-known young Odissi dancers in the US. Along with her twin sister, Ishika, she has trained for almost 20 years, and performed widely all over the world as a company member of Srishti.
Kritika Rajan is the daughter and disciple of Sreyashi Dey. In addition, she has trained extensively with Guru Manoranjan Pradhan from Odisha, and has received further training from Guru Ratikant Mohapatra, Madhusmita Mohanty, Pabitra Kumar Pradhan and Jhelum Pranjape. With a deep interest in performing arts since early childhood, she has performed widely with Sreyashi as well as on their own. Apart from performing in several cities in the US, she has performed internationally in India as well as in Southeast Asia. 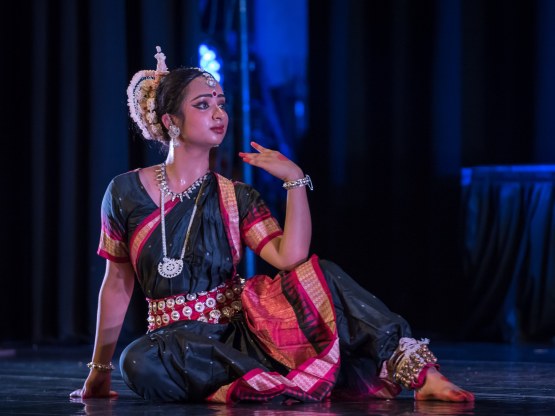 In the US, Kritika has toured with Srishti to San Francisco, Seattle, Washington, DC, New York, St. Louis, Kansas City, Philadelphia, Delaware, New York, West Virginia and Minnesota, in addition to performing widely in and around Pittsburgh, PA and Ann Arbor, MI. In Pittsburgh she has performed at the Kelly Strayhorn Theater, Carnegie Mellon University, the University of Pittsburgh, Frick Fine Arts, SV Temple, Carnegie Museum, the Children’s Museum, etc. In Ann Arbor, their performances have been at the University of Michigan Museum of Art, Mendelssohn Theater at the University of Michigan, Washtenaw Community College, Copper Colored Mountain Arts Center, Troy Temple and the Detroit Institute for the Arts.
In 2012, Kritika performed at the Downtown Dance Festival/Erasing Borders in New York City, along with the Srishti ensemble, receiving wide acclaim and a glowing review in the New York Times.
Kritika is recognized as extraordinarily talented Odissi dancer of the new generation. Her dance has been acclaimed for its technical perfection as well as its pleasing visual geometry reminiscent of temple sculptures from Orissa. She graduated from the University of Michigan with a triple major (Economics, Biology and Anthropology) and works as an Economics and Finance consultant in Washington, DC. She spends time in both Ann Arbor and Washington, DC, working on dance and her professional commitments in parallel.