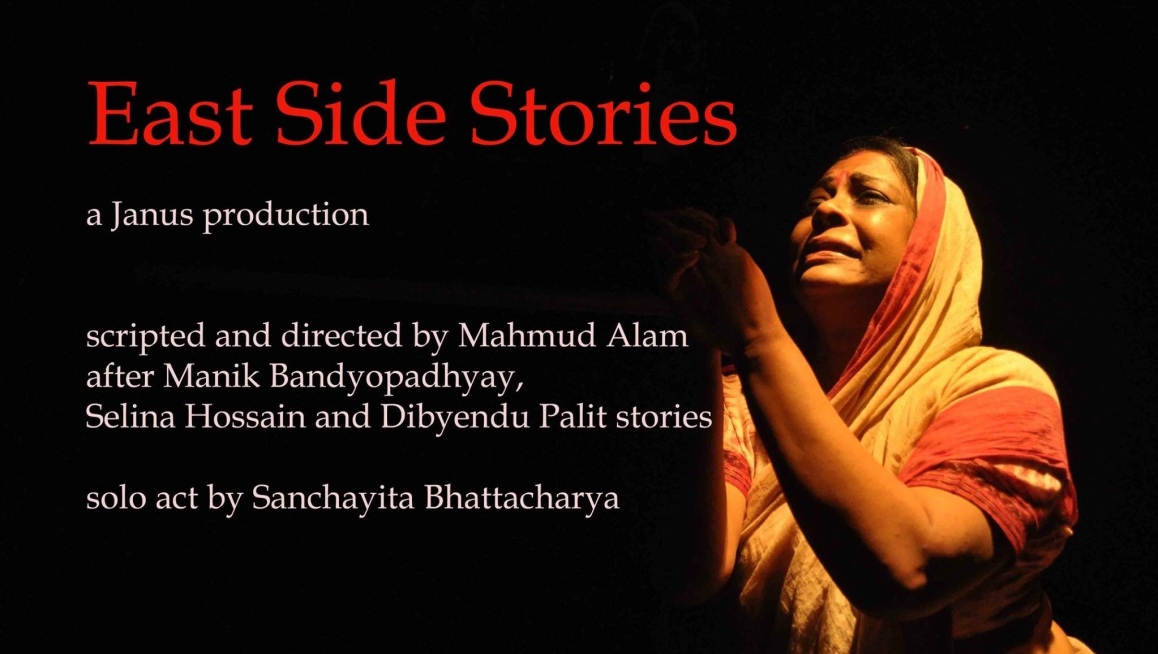 This powerful solo theater piece performance looks at the Indian partition and how it has shaped the narrative of the two regions of Bengal which not only share a language but also a common cultural heritage. The events and stories of those times are seen through the eyes of a woman, a contemporary woman. As the stories are retold, we find contradictions in our acquired sense of nationalism and development. We become aware of our changing values, the limitations of memories as well as of political borders. The performance does not try to provide any answers but throws up several questions for the audience to ponder.

Recent performance photos of East Side Stories at Janus Center for Visual and Performing Arts in Kolkata, India: 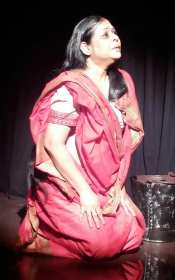 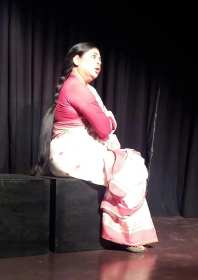 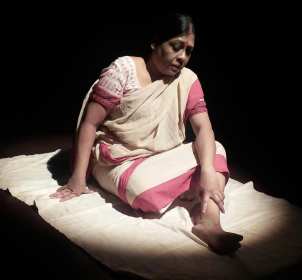 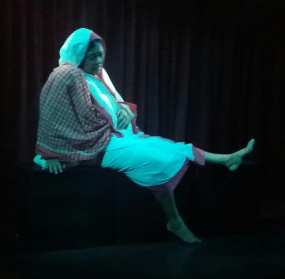 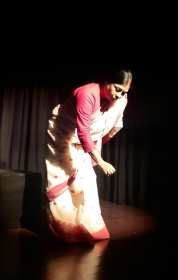 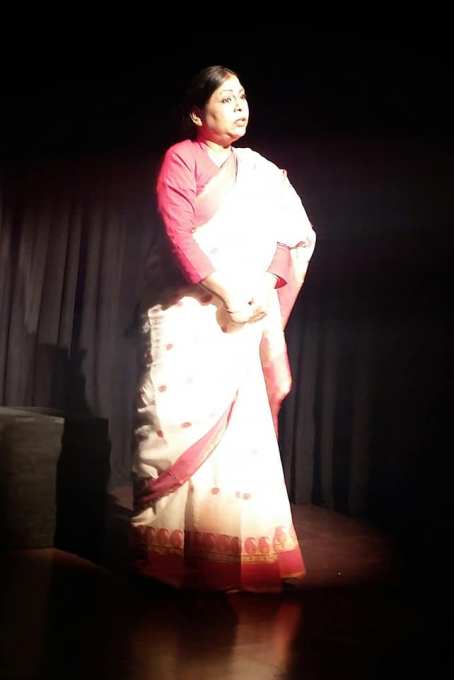 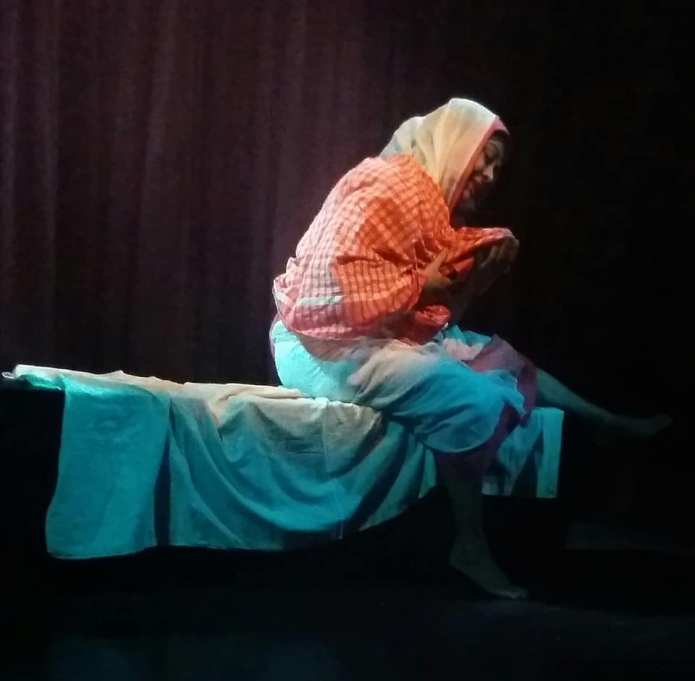 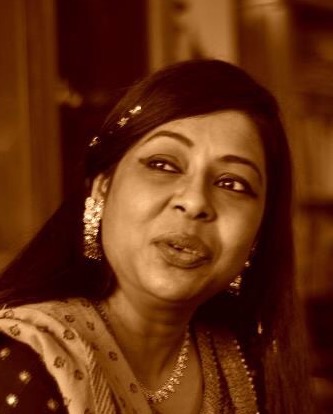 was born into a family of  artists. Her father and all her uncles were painters and sculptors by profession. She took to the stage at an early age and was an active participant in all her school theatre activities in Delhi.
She moved to Kolkata in 1981 and became deeply involved in lights and set designing at Jadavpur University. A first class holder in her Bachelor’s and Master’s degrees in International Relations she went on to receive a research scholarship from her university. In 1984 she joined Stagecraft, an English language theatre group in Kolkata, and was highly acclaimed in her roles in plays like ‘ The Night Of January 16th’ and ‘ Crimes Of The Heart’.

In the process she worked with directors like Satyadev Dubey, Fritz Bennewitz, Anmol Vellani, Rodney Marriot, Usha Ganguly, John Britton and W. Staniewski among others. Professionally she has followed her other passion and is a qualified chef having passed out with a Grand Diplome from Le Cordon Bleu in London where she has also worked in several major restaurants. Her own two restaurants in Kolkata, Copper Grill and The Restaurant On The First Floor have received rare reviews from food critics. She wrote her book ‘Travelling Flavours” about cuisine in the Middle East and Africa where she had worked for some time. She has also developed an unique theatre cum food show named ‘Travelling Flavours – The Talkathon’ where she joins her passion for theatre and food in an unique talk show where she cooks live.
Most of her recent theatre works have been directed by Mahmud Alam where her roles in plays such as ‘A Woman Alone’ and ‘Safarnama’ have received popular and critical acclaim. Sanchayita has performed in many major theatre festivals in the country. She has co founded JANUS with Mahmud Alam to continue her passion for theatre and to provide a platform for both visual and theatre artists of the city and beyond.

Her latest role is in the JANUS production, “East Side Stories,” is directed by Mahmud Alam. She is both the protagonist and the narrator of these stories culled from the human experiences of the partition of Bengal in 1947. 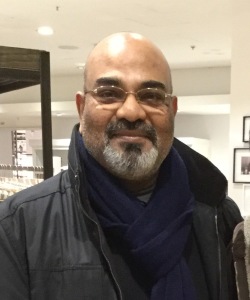 The partition of India was a traumatic experience for all, but was more so for the millions of people who crossed the borders on both sides.

It is generally accepted that the 1947 Partition of Bengal is very different from that of West Pakistan,  because of numerous social, political & historical reasons.

The 1950 communal riots caused a massive number of people to enter West Bengal. The very core of everyday lives of these people were so intertwined,  that the wounds still continue to fester.   Interestingly the westward migration has continued unabated for the last seven decades since independence.

The identity of the Bengali people, whether Hindu or Muslim, rests on their shared language, rituals & customs as well food habits and memories. The emergence of Bangladesh as an independent nation in 1971 is proof that the partition of India on the basis of religion was wrong.

History is witness to the fact that whenever there is violent uprooting & displacement of a people, the question of gender becomes a serious issue & at the same time compulsions of survival start to take precedence over moral concerns. We see it happening again like a re – emerging cancer in today’s world.