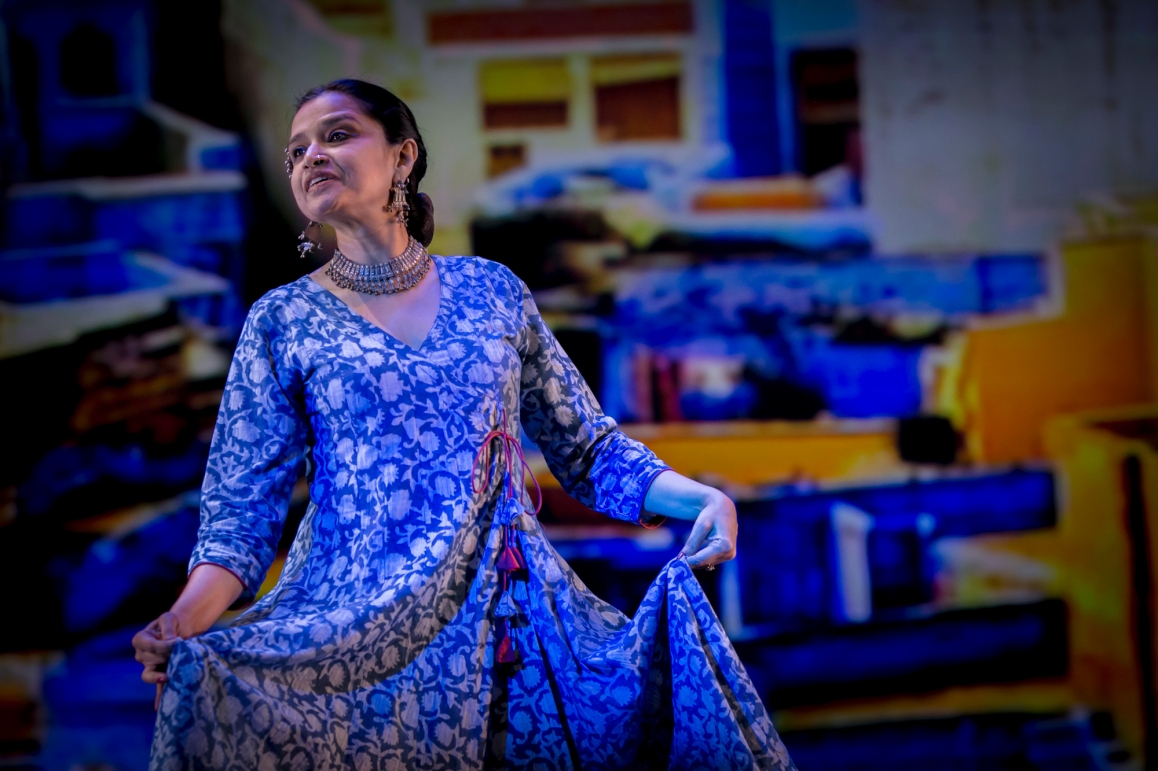 Metiabuz in Kolkata is the place where the British exiled the last emperor of India, Wajid Ali Shah, a poet and an aesthete.  In this dance theater piece, Metiabruz, a forgotten corner of a forgetful city, is a metaphor for the habitations of poetry.

Courtyard Dancers is a non-profit Kathak dance company based in Philadelphia and Kolkata. We are especially interested in working with poetic forms in Kathak styles such as Ghazal, Thumri and Qawwali for exploring emotional landscapes of love, justice, humanism, and hope. Our dance-theater creations juxtapose the beauty of the classical forms with everyday movements to envision our own collages of life. We strive to make dance relevant to lived and diverse experiences of our lives, both ordinary and unique. While we work with Indian dance forms that are rooted in traditions, we are continuously searching to mold them to express the contemporary. We believe that tradition and contemporary are not oppositional, but are best understood as legacies, connections, and transformations

Pallabi Chakravorty, visual anthropologist, dancer, choreographer, has studied dance all of her conscious life. She is the founder and artistic director of Courtyard Dancers. Pallabi studied classical Indian dance such as Bharatnatyam and other folk forms from Children’s Little Theatre, Kolkata from an early age. She toured India as a student there. Later she was immersed in the study of Kathak dance for two decades. She studied Kathak under the tutelage of Guru Bandana Sen, one of the foremost disciples of the legendary Kathak maestro Shambhu Maharaj and now a legend herself. Pallabi has performed widely and her dance works have been presented in myriad venues in the U.S, Europe, and India. Recipient of many grants and awards both for her artistic and scholarly works from India and the U.S, Pallabi received the Rocky’s dance award given by Live Arts Festival/Philly (Philadelphia) Fringe in 2006. Pallabi is also an active researcher and scholar and is the author many books including “Bells of Change: Kathak Dance, Women and Modernity in India”.  Pallabi is a full time faculty member in the Department of Music and Dance at Swarthmore College where she directs the Dance Program.

Tejal Mehta has been a member of the Courtyard Dancers and under the tutelage of Pallabi Chakravorty since 2009.  Always having a passion for Indian culture and heritage, Tejal had been dancing, performing and later, choreographing, various Indian dance forms including garba and folk, since the age of six. However, it was not until Tejal was introduced to the rich and vast world of Kathak dance by the Courtyard Dancers that she has learned just how spiritually and intellectually profound Indian dance can be. Training and performing in this beautiful art form under Pallabi-ji has truly been life-changing for Tejal and she has learned to push mental and physical boundaries through the art of Kathak. Outside of Courtyard, Tejal is an attorney at a large financial institution.

Mahasweta (aka Maha) has enjoyed dancing and watching Kathak dance from the age of five. Her early years of Kathak training were under the tutelage of Keka Sinha in Bombay, India.  Maha started learning from Pallabi Chakravorty in Philadelphia in 2009, and subsequently started teaching the Courtyard Dancers’ Kathak beginners class in 2011.

She enjoys imparting what she knows and also continues to learn from her students. Maha is passionate about Kathak and sees it as one of the few dance forms that imbibes strength, grace, and historical complexity which has allowed the dance form to constantly adapt through its ever changing environment, thereby making it a popular dance medium.

Outside of Kathak dance, Maha pursues a full-time career in science in drug development at the University of Pennsylvania.

Palak‘s versatility in various dance forms is one of her biggest strengths, from Bollywood thumkas, to being trained as a Bharat Natyam dancer, to learning Hip Hop and Zumba, Palak has combined all her learnings and has choreographed, danced, and won at multiple intercollegiate events in India and US. Discovering Pallabi in 2010 and getting an opportunity to learn Kathak from the maestro was Palak’s turning point. Ever since Kathak, Palak has been focusing her energies towards being a better Kathak dancer and has performed with Courtyard Dancers in almost all of their recent performances. Being trained and employed as an Electrical Engineer, Palak is also a whiz at helping Courtyard Dancers manage through all their technical and marketing aspects.