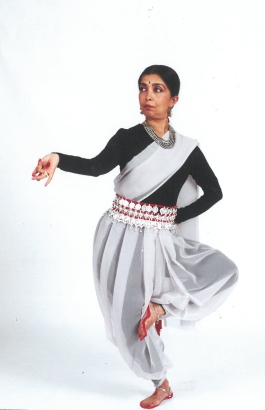 Earth
an interpretation of Rabindranath Tagore’s poem Prithibi in a contemporary style based on Uday Shankar’s creative dance style.

Bipasha Guptaroy
Bipasha is a performing artist in the Odissi and contemporary Indian dance. She received her initial training in dance at the Uday Shankar India Culture center under the tutelage of Smt Amala Shankar, wife of Uday Shankar. At the center in addition to being trained in the creative style of Uday Shankar she was trained in Bharatanatyam, Kathakali and Manipuri. Bipasha holds a diploma in dance from the center. She performed as a member of the Center’s performing troupe in India for several years and accompanied the troupe to the Indian Trade Fair in Moscow and the American Dance Festival in North Carolina.

She continued her training in Bharatnatyam with the renowned dance exponent Leela Samson at Bhartiya Kala Kendra in New Delhi and later in Bharatanatyam and Odissi with Neena Gulati in Boston. She has performed extensively in Odissi and contemporary style within and outside USA.

Bipasha established Srijan Dance Company and choreographed and performed extensively in Shankar’s style with the company. She was a collaborator in a dance residency in Shankar’s style funded by the Center for World Performance at University of Michigan. She was a choreographer and performer in the site specific production “In the Garden” at the Matthei Botanical Gardens directed by Professor Jessica Fogel of the Department of Dance at University of Michigan. She has been a guest lecturer at the University of Michigan in Topics in World Dance. Shankar’s dance style is marked by its universal appeal which uses a contemporary dance language based on elements of the rich variety of Indian dance. Using this style Bipasha explores and depicts varied themes and poetry in English.

Bipasha holds a Ph.D in Molecular Biology and is a research scientist in Pharmacology at the University of Michigan Medical School.

Esha Biswas
Esha started training in the North Indian Classical dance form, Kathak, when she was 8 years old under the instruction of Mrs. Ashoka Rao. Esha has not stopped dancing ever since, and completed her Kathak Rang Pravesh in 2012. She graduated from the University of Michigan with a Bachelor of Science in Ecology & Evolutionary Biology, and a Minor in Music. Esha is currently the Student Affairs Coordinator at the University of Michigan Residential College, where she is committed to empowering students in an enriching liberal arts environment.

Shejuti Das Gupta
Shejuti started learning dance from a tender age of 4 and dance became a part of who she is. She learnt Bharatanatyam at Kalamandalam, Kolkata, India, under the tutelage of Guru Thankamani Kutty. In 2008 she was selected to represent India in Japan in a cultural exchange program under Dr. Urmimala Sarkar. She continued the journey by performing in numerous shows across United Kingdom working on different works of Rabindranath Tagore. She took to teaching dance to underprivileged children. In 2012, she conceived and started the Indian Dance Society, in University of London. Shejuti completed her Ph.D from School of Oriental and African studies in London and is currently an Assistant Professor at Michigan State University.

Proma Khosla
Proma Khosla has been dancing her whole life. She trained in Bharatanatyam from Sudha Chandrasekhar and completed her arangetram in 2010. She also trained in contemporary style of Uday Shankar under Bipasha Guptaroy. She was deeply involved in dance at the University of Michigan through IASA cultural shows and the competitive dance team Michigan Manzil. Currently, Proma performs and teaches with Ajna Dance in New York City and recently performed in world premiere of Bollywood Boulevard at New York’s Lincoln Center.

Shruti Pranjape
Shruti has been training in Bharatanatyam for fourteen years. She began her training in Chennai with Smt. Deepalakshmi Sundar, performing in temples around the city. She followed this up with classes from Dr. Suchitra Mitra, under whose guidance she performed widely in the Chandigarh area in Bharatanatyam and allied styles. Most recently, she has been a student of Parimal Phadke and Saee Shetye in Pune, where she performed for non-profits and college fests. Presently, she is pursuing a PhD in theoretical physics at the University of Michigan. At Michigan, she has joined Michigan Sahana as an enthusiastic member and has recently started training in Odissi from Sreyashi Dey.

Debolina Mukherjee
Debolina was trained in Bharatanatyam by Guru Thankamani Kutty at Kalamandalam in Kolkata. She has also learned in contemporary, folk and Bharatanatyam from Smt Kusum Pal in Mumbai. She has performed extensively in Kolkata Mumbai and USA. Debolina is currently training in Odissi with Bipasha Guptaroy. She is preparing to join graduate school to obtain a doctorate of physical therapy degree.

Shobhita Saxena
Shobhita has been an avid admirer of the Odissi classical dance form since her childhood. Amidst life events, she started formal Odissi training recently with Bipasha Guptaroy. Shobhita has been a lead dancer until high school for various folk and regional Indian dance styles such as Manipuri, Rajasthani, Garba and others. Shobhita is Global IT Executive Director leading the Applications’ Delivery, Performance and Analytics team at Adient.

Debjani Sarker
Debjani has been performing from an early age in community cultural programs presenting Rabindranath Tagore’s dance dramas and folk dances. She has choreographed dances for many such programs. She is deeply interested in classical Indian music. She is currently training in Odissi from Bipasha Guptaroy. Debjani is an IT professional in international marketing and currently a Product Manager at Ford Motor Company.